A Man of God: Elder Symeon 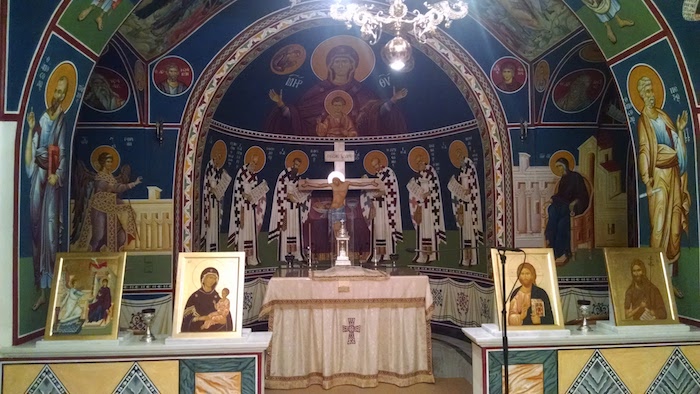 Here is a collection of post from pemtoousia’s website about Fr. Symeon Kragiopoulos from one of his spiritual children.

Below is the first article with links to the next four. During my stay in Thessaloniki, I was able to attend Church at the Monastery in Panorama. During my frequent trips, I was amazed by the spiritual life being lived around these monasteries. I very much loved attending all night vigils at the Nativity of the Theotokos Monastary.

You will read about the vigils that started around 9:00 pm and would go to about 1:00 am. These were set up so working people could participate in the spiritual life. For me, these vigils at the monastery of the Nativity of the Theotokos were amazing, prayerful, and other worldly.

I also greatly benefited from my multiple conversations with Fr. John and Gerondessa Philothea. They were among some of the most profitable spiritual conversations I have ever had. I hope in the future more of Elder Symeon’s books get translated into English.

Unfortunately, I never had the opportunity to meet Fr. Symeon and he passed away about 4 months after we arrived, but I did get a a taste of his life and teachings by the people who gathered around him, from his spiritual children and the atmosphere in the churches at the monasteries: Holy Trinity, and Nativity of the Theotokos. For me these experiences were the best part of my stay in Greece.

A Man of God

It is with some trepidation that I set pen to paper to record -what? What can one write about a personality whose holiness and spiritual wisdom stretched over many decades, who was shepherd to thousands of souls, saving them from destruction and bringing them into ‘a place of verdure’? About the comforter, the advisor, the father, the refuge of every soul in pain and every confused thought? About the last person who walked and strove in the ascetic life with the holy fathers whom God was pleased to give our generation, those who died to live, because, in living they were dead to the world. ‘so that the world may live’ through Christ, to Whom he brought it through his way of life, his teaching and his prayers? What can one say about a man who rivaled Saint Païsios in his humility, Saint Porfyrios in his discrimination, Father Sophrony in his wisdom and Elder Iakovos in his love?

Considering all the above, when I was asked by the spiritual children and heirs to the holy legacy of Elder Symeon to write something In Memoriam, I initially declined for fear that I would not be able to paint a proper picture of him in words, that I would diminish his spiritual stature by not being able to render, even faintly, what the late father really was. The opposing argument, that I’d known him for almost half a century and that our relationship was not merely one of spiritual fatherhood but also close friendship, made me agree to write, though with the proviso that I would mention only my personal experiences. Let me then begin. In September of 1969, I’d just taken up a position at the University of Thessaloniki. I visited the Pournaras bookshop, which was at that time not merely a place for selling books but somewhere where colleagues could meet. It was a reference point, you might say. Browsing through the new books spread out on the counter, I heard someone ask Panayiotis Pournaras.

‘I’ve heard that there’s a new professor at the university. A Mister Galitis. Do you know him?’ I turned and saw a pleasant-looking figure, a priest with a red beard, a tranquil look about him, kindly eyes and a bright smile, just at the moment when Panayiotis was pointing to me, ready to make introductions. We chatted for a while and I was impressed by his interest in the new books and also by how well he was up in theological matters. He was following the current theological situation, which was hardly common among priests dedicated to their pastoral work.

I saw Fr. Symeon shortly afterwards at the headquarters of the Metropolis. He’d been appointed a member of the Supervisory Committee of the Seminary, where he’d been Director. The Chairman of the Supervisory Committee, a highly placed cleric, with all the exuberance he could command behaved towards Fr. Symeon with excessive familiarity, with his teasing and slightly ironic and disdainful manner, which made me, at least, feel awkward. But Fr. Symeon was undisturbed and behaved like an ‘altar-boy’. He made an obeisance and remained silent. My discomfort then became admiration for the wonder of humility.

Fr. Symeon’s office in Saint Theodora’s was in the right wing, on the first floor. He asked me to visit him there, which I often did, most gladly. He came to my office, too, but not so often because he couldn’t leave the School much. I recall with nostalgia our long discussions on spiritual, theological and ecclesiastical matters. He was a profound anatomist of the soul and, at the same time, an erudite theologian with rare learning, which he was always trying to increase. He discussed well, had a clear mind, breadth of spirit and a particular sharpness. He would grasp a subject quickly and was comfortable even talking about secular education.

Later, he began vigils at Saint Theodora’s. At one of these he had the joy of tonsuring one of his spiritual children. Fr. Symeon was the person who introduced this new form of vigil, which did not last all night, but covered two or three hours before midnight, and about an hour after, with a half-hour homily. In this way, people who were working and couldn’t get to a liturgy in the morning and for whom an all-night vigil would have been too much had the chance to participate in liturgical life. This practice found many admirers and is now popular in many parts of Greece and abroad.

Every liturgy Fr. Symeon served was a real and literal initiation into the sacrament. It was solemn, neither drawn out nor hurried, without highlights, but not monotonous. At first, he didn’t have chanters. Anybody who could would do their bit. Even I chanted on occasion. These first impromptu chanters usually sang poorly and this created the impression that Fr. Symeon actually wanted this: low profile, no special effects. This would encourage contrition. A friend of mine told me off once when I departed from this ‘rule’. But soon proper chanters began to appear and the cultivation of music became part of the whole training the people acquired by being close to the blessed Elder.